Q. My sister-in-law recently claimed that the card we get from the DMV that allows us to legally drive is supposed to be referred to as a “driver license” instead of a “driver’s license.” I would love to hear your input as this has been bothering me for a few weeks now!

A. In about thirty US states, from Alabama to Nevada to Wyoming, the term printed on the license itself is “driver license.” In about twenty others, from Arkansas to Maryland to West Virginia, it’s “driver’s license.” (The term is usually, but not always, in all capital letters.) But according to the entry in Merriam-Webster, each of these would be a “driver’s license.”

Incidentally, the DMVs in some of the states that issue a “driver license” refer to it on their websites as a “driver’s license”—and vice versa. Our editors would default to “driver’s license” in each case—including for Indiana, where the card itself says “operator license.” This advice isn’t universal, however. In the UK, for example, it’s usually called a “driving licence”—according to Merriam Webster, the OED, and GOV.UK.

Q. Hi! I have a manuscript that mentions several Super Bowl games. I know AP style says pro football Super Bowls should be identified by the year, not the roman numerals (“1969 Super Bowl,” not “Super Bowl III”), but does Chicago have a guideline for the best way to identify the games? Is it wrong to use arabic numerals instead of roman? Thank you!

A. AP style makes sense for reporters, who often need to achieve clarity in the fewest possible words. And for those of us who haven’t memorized the chronological sequence of NFL championship games, “1969 Super Bowl” is more meaningful than “Super Bowl III.” However, both are correct, and you can use the latter when you’re not following AP style. As for the number, you could always refer to “the third Super Bowl,” but to reflect how the game is generally known, you wouldn’t write “Super Bowl 3”—in spite of what AP might say—any more than you would describe Joe Namath (the winning quarterback in that contest) as having worn number XII (or even number twelve) on his jersey. In other words, it’s Super Bowl III (and number 12).

Q. When writing a bibliography, is it acceptable for the entry to be split between pages? Or should I insert a page break before the entry to keep it all together?

A. Please, whatever you do, do not insert a page break before the entry; if you do, then any changes you make to the document before that page break could easily result in the page just before the manual break running short. In other words, the document will no longer automatically reflow across the page break at that point. (One of a copyeditor’s many jobs is to find and eliminate such problems.)

To prevent an entry from breaking across pages, the proper way to do it is to tell your word processor to keep those lines together. First, put your cursor in the entry. Then, in Microsoft Word, go to Paragraph > Line and Page Breaks and check the box next to “Keep lines together”: 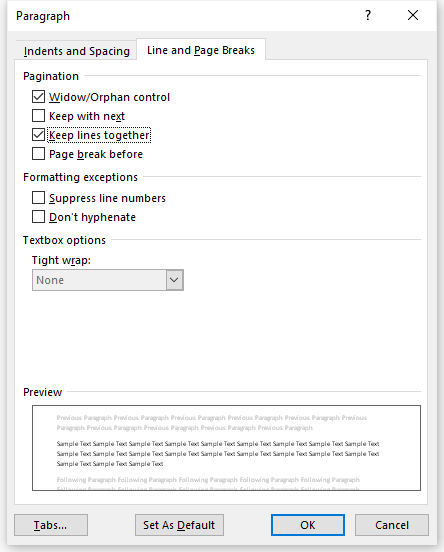 In Google Docs, the setting is under Format > Line & paragraph spacing > Keep lines together. By the way, it’s okay if a bibliography entry breaks across two pages. But note that widow/orphan control is on by default in both Word and Docs. That feature, by preventing the first or last line of a paragraph from being stranded at the bottom or top of a page, respectively, will also thereby prevent any paragraph of three lines or less—including a bibliography entry—from breaking over a page.

Q. I work on science textbooks and science trade books (I wonder why I’ve never needed to ask this question before) and have this question: Does one capitalize “sp.” (or “spp.”) in titles? For example: “Dinarda Spp.: The Sneaky Thief.” Unabbreviated, the word “species” would be capitalized. However, were it the actual species name, it would be lowercased. It does look odd capitalized, since it is never so in text, but I’m leaning toward capitalization as being correct. Possibly the answer to this question lies within (within CMOS, that is), but if so I’ve not been able to find it. What say you?

A. CMOS comes close to answering this question. According to paragraph 8.159, which outlines the principles of headline-style capitalization (a.k.a. title case), the second part of a species name is always lowercase in a title, even if it’s the last word in the title or subtitle. So,

And though we don’t quite say this in CMOS, more than one species of the genus Dinarda would follow the same pattern, even when the abbreviation “spp.” (species, plural) stands in for the names:

In sum, use lowercase for “spp.” (and for the singular “sp.”) wherever it occurs in a title or heading. Thanks for giving us this opportunity to clarify our rule.

Q. In the phrase “today, tomorrow, & always” should the comma before the ampersand be removed?

A. Though the serial comma has officially been Chicago style since 1906 (when the first edition of the Manual was published), we prefer to omit it before an ampersand (see CMOS 6.21). The serial comma—the one before the conjunction in a series of three or more (it’s also known as the Oxford comma)—suggests thoroughness (some consider it to be unnecessary); the ampersand, by contrast, is an abbreviation (derived from the Latin word et, or “and”). The two together, then, make for an odd pairing of the thorough and the minimal. Either remove the comma or spell out the word “and.”

Q. How does one cite the place of publication of an older book issued in a city whose name or nation has since changed? For example, a book might describe itself on its title page as having been published in Pressburg (now Bratislava) or in Straßburg, Germany (now Strasbourg, France). Should I give the place as it existed when the book was published or as it exists now?

A. Record the place of publication as printed in the source itself. The cities you mention are still known in German as Pressburg and Straßburg, so the differences may depend not only on the date of publication but also on the language. If the name of the city as it is officially designated today is relevant in some way to your reason for citing it or might be helpful for your intended audience, you can add it (and any other relevant details) in square brackets: e.g., Pressburg [Bratislava]. But in most cases, the year of publication will supply sufficient context. See also CMOS 6.99 and 14.131.

Q. Dear Chicago editors: What should I do if my source appeared in a newspaper (which I cannot reach today), but is featured on a website? How can I give credit to both the paper and the website? The article is something I found on the website of Columbia journalism professor Samuel Freedman.

A. You would attribute the article to both. For example, here’s how you might cite the article “Don’t Reward Deceitful Writers” (as in a note):

That should work for most purposes. But if your research depends on finding the original source—or if you’ve come across the article on some random site rather than, as in this case, a website hosted by the author—it’s best to track down the article itself. For example, if you have access to a library, you might find the article via one of the full-text databases from EBSCOhost:

Note that this citation differs from the automatically generated Chicago-style citation offered with the article by EBSCOhost, which renders it as follows:

That citation isn’t a total loss, but it has some problems: (1) The author’s name would be inverted in a bibliography entry (Freedman, Samuel G.). (2) It’s missing the date of publication. (3) Chicago doesn’t require access dates for sources that include a date of publication. (4) The URL is not only littered with ugly syntax, but it’s unhelpful for anyone who isn’t logged into a network with access to EBSCOhost. (5) Finally, a formal bibliography entry isn’t necessarily required for a newspaper article cited in the text or in a note. See also CMOS 14.11 and 14.198.