Q. My students are trying to figure out how to properly cite the Mayflower Compact (1620), and we cannot figure it out! Do you have any insight?

A. For a passing mention, you’ve cited the Mayflower Compact simply by giving it a name and a date; it’s a famous document, and it’s the only one from 1620 known by that title (which you’ve styled correctly; see CMOS 8.80). To cite it more formally, you’d have to specify which version of the text you consulted. The original document was lost, so you’d need to rely on a transcription. The earliest versions were transcribed by William Bradford, a signatory to the original compact who went on to serve as governor of Plymouth Colony. But you don’t have to go that far.

Yale Law School offers a transcription of the Mayflower Compact online. You could cite that page as your source (see CMOS 14.207), but it would be better to consult the source relied on for that text, rather than assume that it’s been transcribed correctly. Fortunately, the source is cited at the bottom of the page: The Federal and State Constitutions, Colonial Charters, and Other Organic Laws of the States, Territories, and Colonies Now or Heretofore Forming the United States of America, a book compiled by Francis Newton Thorpe and published by the US Government Printing Office in 1909.

Most books by the US government are in the public domain, as are many older books. The Internet Archive and Google Books can be good places to find and consult scanned reproductions of such out-of-copyright works; these can be cited as if you consulted the physical object. A little digging at the Internet Archive for the book cited at the Yale page will reveal that it was published in seven volumes, organized by US states.

The first volume includes a table of contents. There you’ll find, listed under Massachusetts, “Agreement between the settlers at New Plymouth—1620” (the original name of the compact). Massachusetts is covered in volume 3. Click through to page 1841 (the page listed in the table of contents), and there it is: 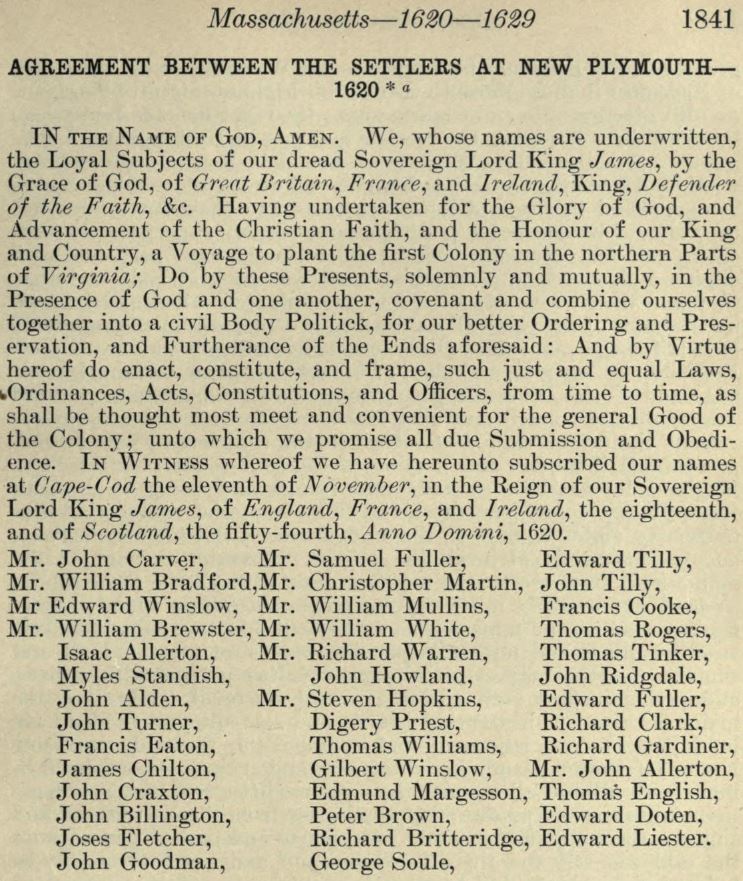 At the bottom of that page, an asterisked footnote cites “William Bradford’s Plimouth Plantation” as the source of the text; a lettered footnote explains the circumstances under which the compact was written and signed. Again, you don’t need to track down Bradford’s original transcription. Instead, you could stop here and consider your work done. Here’s what the citation would look like:

“Agreement between the Settlers at New Plymouth—1620.” In The Federal and State Constitutions, Colonial Charters, and Other Organic Laws of the States, Territories, and Colonies Now or Heretofore Forming the United States of America, compiled and edited by Francis Newton Thorpe, vol. 3, p. 1841. Washington, DC: Government Printing Office, 1909.

Note that we’ve used the abbreviation “p.” (page) to make sure “1841” isn’t mistaken for a year. This is usually unnecessary in a Chicago-style citation, but it’s never wrong to provide clarity where needed. Note also that we’ve added a comma after “Constitutions” in the title of the book; that comma doesn’t appear in the source, but it’s clearly intended (on the book’s title page there’s a line break instead of a comma). See also CMOS 8.165 (for permissible changes to titles) and 14.107 (for citing a contribution to a multiauthor book).